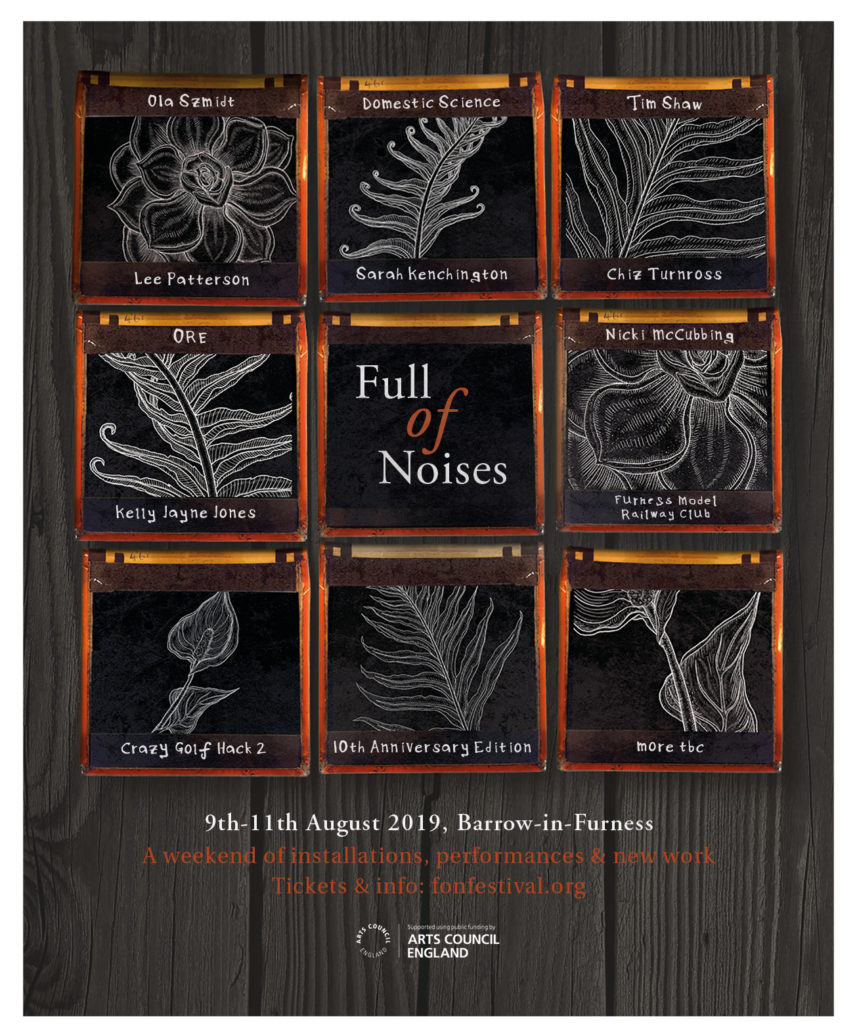 This year’s special 10-year anniversary edition of Full of Noises brings artists from all over the UK to Barrow in Furness to share newly-commissioned pieces and rarely seen work over three days in August. Click here to download the full programme. The lineups for our two evening concerts are:

We continue our four-year programme of new commissions for Barrow Park with a series of playful interactive sound sculptures for the pitch & putt course that revisits Crazy Golf Hack (2011) by Ross Dalziel, Chiz Turnross and Douglas Laing, our only piece so far to have featured in both The Wire and Private Eye. In addition to Domestic Science and Chiz Turnross, expect new work from Nicki McCubbing, Sarah Kenchington, Sam Underwood, John Hall & Chris Dennett and a welcome entry from our neighbours Furness Model Railway Club. 2018’s bike-cranked instrument Thing Thong by Sarah Kenchington and Sam Underwood returns in a new improved mobile form – lookout for these around the park over the weekend.

Whilst visiting the park, drop into the hothouse where there is another chance to hear Jenn Mattinson’s evocative radio piece using interviews with people for whom the park holds special memories alongside works from our archive of radio commissions. Workshops with two of this year’s commissioned artists Kelly Jayne Jones and Tim Shaw also take place in the park, as does a chance to bring your favourite T-shirt and have it hand-printed with a specially created 10-year anniversary design by Susan Deakin whilst art & science duo Dave Lynch and Christophe de Bezenac take over the park pavilion on Saturday 10th for Proto Lab, showcasing their work with VR.

Friday evening opens with artist Chiz Turnross presenting a set of skewed pop in the grand surroundings of Barrow Town Hall, alongside small and fascinating sounds made big by Lee Patterson. Newly developed work from Ringmind and Tim Shaw also feature Tim’s work growing out of time spent on South Walney Nature Reserve earlier in the year as part of our collaborative residency project with Soundcamp. On Saturday, Kelly Jayne Jones presents a new work exploring Cumbria’s musical stones in a surround sound performance, followed by a set from FoN 2013 favourites ORE and Ola Szmidt who some of you may remember from our very earliest shows, in a special collaboration with Lesley Harris.

We look forward to celebrating our 10 year anniversary with you over a slice of cake and many weird and wonderful sounds – here’s to the next 10 years!

Click here to read more about this year’s artists.

Full of Noises is a chance to see and hear a programme of bold new work in the unique surroundings of the Furness Peninsula. Since 2009, the festival has hosted performances and projects by more than 150 artists ranging from Felix Kubin, AGF, Tetsuo Kogawa and Philip Jeck to Haco, Hildur Gudnadottir, Laura Cannell and Lee Gamble.

This year’s weekend programme takes in specially commissioned work, talks, installations and workshops by a broad spectrum of composers, musicians and sound artists from the UK and beyond. Join us in Barrow this Summer for what our audiences have called ‘a world-class sonic adventure’.